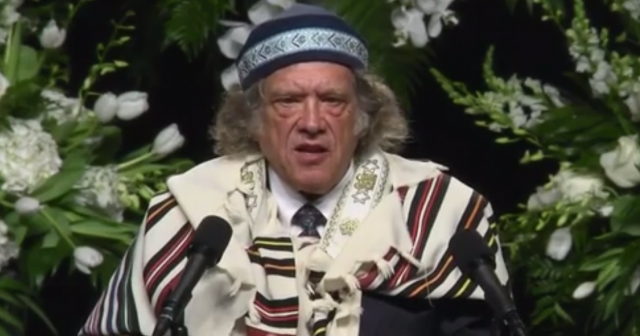 In case you who missed it, here’s Rabbi Lerner’s talk at Muhammed Ali’s funeral. If it inspires you, please read below for how to be an ally with Rabbi Lerner to help build the world he describes.

To read the transcript of his speech, click here.

Wondering why Rabbi Lerner got invited and how to respond to the handful of naysayers who have been upset by Lerner's powerful message? Please read below.

Muhammad Ali had known Rabbi Lerner as a friend and ally in the 1960s and early 1970s when both were indicted by the U.S. government for their roles in opposing the war in Vietnam. He then wrote Rabbi Lerner to praise his book with Cornel West Jews and Blacks: Let the Healing Begin. Approximately seven years ago, he decided to invite Rabbi Lerner to represent the American Jewish community at his memorial service. Rabbi Lerner only received a phone call invitation from the Ali family four days before he got on an airplane to Louisville.

Ali knew Rabbi Lerner and invited him precisely because he would stir the crowd and make it, as Ali's wife said about the intent of the event, "a teaching moment." He was told to speak from his heart. Ali did not want pious platitudes--he wanted someone who would ruffle feathers and do what Ali had done with his life--speak truth to power. And in the Jewish world, that meant choosing Rabbi Lerner who had been one of the very few rabbis willing to challenge the most sacred idol of the Jewish world--its subordination to the policies of the State of Israel. Of course, Ali knew that Rabbi Lerner has always also been a supporter of Israel. He critiques Israel's policies towards Palestinians not only because they are immoral and a violation of the Torah's command to "love the stranger/the Other" and its pointed command: "when you come into your land, do not oppress the Other, remember that you were the Other/the stranger, in the land of Egypt," but also because Lerner has always said that the Israeli Occupation of the West Bank is, in the long-run, undermining Israeli security, provoking acts of terrorism against Jews (though Lerner condemns those acts), and has generated hatred of Israel among nations around the world who never have had any history of anti-Semitism and do not have religious teachings that would have led them in the direction of disliking Jews. In short, Ali knew that in picking Lerner, he would be choosing someone who would carry on Ali's tradition of challenging the powerful (some of whom would be in the room that day or watching it on television). Since this was Ali's memorial, he had every right to decide who would speak.

Some people objected to Lerner "politicizing" a memorial, as though there is one right way to do a memorial. But Lerner spoke after an African American preacher had already politicized the event by talking about the oppression of African Americans and how Ali had stood up to that oppression. People who only watch Lerner's talk might think that up until the time he spoke, the memorial was merely about how nice a guy Ali was. But, in fact, it was from the start, as Ali intended, an event shaped to go beyond hero worship of Ali and to shake up a world that might have been lulled back into personal adoration of Ali, rather than to listen to the radical message that Ali himself wanted to convey.

Some Jews have complained that anyone who publicly challenges Israeli policy must be anti-Semitic or a self-hating Jew. But this is a ridiculous charge against Rabbi Lerner. His religious services and Torah teachings at Beyt Tikkun synagogue in Berkeley, CA (which also welcomes non-Jews) and his book, Jewish Renewal: A Path to Healing and Transformation, have inspired many people to return to their Jewish heritage who had previously abandoned it. Calling those who critique Israeli policies self-hating Jews is the kind of response that the defenders of Israel's policies toward Palestinians always use: they can't justify the policy, so instead they try to delegitimate the people who are making the criticisms of those policies. This attack on fellow Jews is "lashon ha'ra," evil language used to demean individuals, done by people who can't find a rational way to defend oppressive policies.

Yet Lerner himself counsels compassion toward those who try to demean him and other spokespeople for the Israeli peace movements and their American allies. He teaches that these people are often deeply scared, and that given the history of Jews being murdered and hated for so many centuries, it is unfair to expect that all Jews can overcome that history and be open to listening to those who criticize Israel. So what is needed, Lerner teaches, is to recognize that even the most rabid haters, including those who have physically attacked his home and sent endless death threats to him and to Tikkun magazine, are equally made in God's image, and deserve the same compassion that Lerner preaches for everyone else on the planet. It is not through demeaning the right-wingers and Israel-worshippers in the Jewish world that change can happen, but only through empathy, compassion, and assuring Israel and world Jewry that a Palestinian state can be created that will live in peace with Israel, and that we can overcome these fears and move forward with policies that will give both Israelis and Palestinians security and respect, and heal the wounds of both peoples.

He lays out how this can happen in his book Embracing Israel/Palestine, which you can order at tikkun.org/eip. His only regret about this talk is that he did not have more time so that he could express this compassion toward right-wingers in both Israel and America, and show liberals and progressives a path that would be both radical in its political and economic transformation, and empathic and compassionate toward those who oppose these necessary transformations!
To get that full picture, please subscribe to Tikkun Magazine where he lays out this strategy in the Summer and Fall 2016 issues. If you join the Network of Spiritual Progressives at the $50 level, you get Tikkun magazine as a bonus for free.

If you watch his talk and then get as excited about his vision as the many others who have, but you don't want to join our Network, please make a tax-deductible contribution to support his work at tikkun.org/donate.

You can watch Rabbi Lerner's talk here. For more on how to contextualize Ali's funeral in the context of Orlando, click here.

Cat Zavis is the Executive Director of the Network of Spiritual Progressives (NSP), working to bridge spirituality and politics to build a loving and just world. She leads trainings in Spiritual Activism – Prophetic Empathy and Radical Love. To learn more, go to www.spiritualprogressives.org.