As American soldiers returned from Vietnam in the late 1960’s and early 70’s, they were met with scorn, spat on in airports, and called “baby killers”. The anger directed towards them came from an enraged and educated opposition that had gradually become aware of the injustice and sheer criminality of the wars being waged.
In their passion, progressives in those times went too far in blaming the soldiers, yet were entirely right in insisting that the men and women who pulled the triggers, who opened the bay doors of the planes and dropped the napalm, were also responsible. Carnage doesn’t just happen by itself, and the criticisms and accusations back then were calls to awaken the conscience of the soldier and the nation- they were cries for justice, for humanity, and for an end to the cruelty and abomination of wars of aggression.
Many veterans themselves, aware that they had been deceived, turned into activists against the war. The picture that emerged over time was then one of a public, reunited with the foot soldiers, against the American empire that had used our resources and men and women’s lives for geopolitical ends, in immoral and unjustified wars. There was a period of grief and remorse for blaming the soldiers, for criticizing them so harshly when they too were among the manipulated. The administration didn’t care about their lives either. Looking back, we can say that those in the armed forces during that time were victims as well. These military men and women, however, were not held up then as heroes, or exalted for their sacrifice.
Fast forward to 2015. Since the end of the Vietnam War, the United States government has continued its role as the aggressor in one war after another, and there is now a new extreme in what remains of the American Left. Whereas before we had soldiers vilified for their actions – today there is no criticism of them at all. Instead, many of the leading voices of the public Left are either silent, or have nothing but reverence for the modern soldier. They praise their courage and sacrifice, as if these were virtues all by themselves. In the American Left, there is now a vast gulf between opposing modern wars and any sense that the military men and women are responsible for heinous, criminal acts. The pendulum has swung in the opposite direction –from condemnation of deceived victim-soldier all the way to praise and honor and deference being given them for their dedication, as separate from the particular wars we are now engaged in in the Middle East.

Look at Michael Moore, or listen to everyone from Cornel West to Rachel Maddow and Jon Stewart – the public voices of the Left. They extend unconditional respect to the people in the military while supposedly being against war. Things were clearer when Bush II was president, yet even then, there was little to no denunciation of soldiers or of the armed forces as a profession.
When wars are wrong, each action of the military is an extension of that injustice. It is possible to point to an action and say unequivocally that it is wrong, unjust, immoral, without condemning the person, and I think that is the lesson to be taken from the protests of the 60’s and 70’s. The American Left, as it is now, has lost its voice, its courage, and its moral clarity. It sees no connection between benighted foreign policy and the actions of the young men and women today who are in the armed forces. When we are not willing to speak out against their destructive acts, we have lost some part of our souls.
Educated or not, believing in American superiority, or remaining steadfast in allegiance, the men and women in the Marines and Navy, Air Force and Army today all have a moral responsibility for their actions. We must oppose the wars in which this country is now engaged, seeing them as unjust and barbarous and as extensions of empire. While our political leaders deserve the greater part of the blame, the manipulated and deceived of this generation have also earned their share.
The real danger in this new extreme of military praise is that another generation will find nothing wrong with this profession, and that it is in fact something to be celebrated. A new generation will follow and fall victim to the predator class we’ve always had with us. They will carry out acts of aggression as their predecessors did. They will proceed without knowledge, without conscience to their mission, and innocent men, women, and children will die and be maimed because of it.
American Sniper was the highest grossing film of 2014. This jingoistic tale of a psychopath was seen by millions of people with a radically different national history in their minds- one in which a killer such as Chris Kyle deserves to be celebrated. These same people either think Vietnam was justified, or they don’t think about it at all; they think all of our current wars on the people of the Middle East are righteous as well, and once you cross that line, then anything can be justified. Right here we can see that history is literally a matter of life and death. We forget history that isn’t told to each generation, and when we forget, we have no reference point for where we are now. 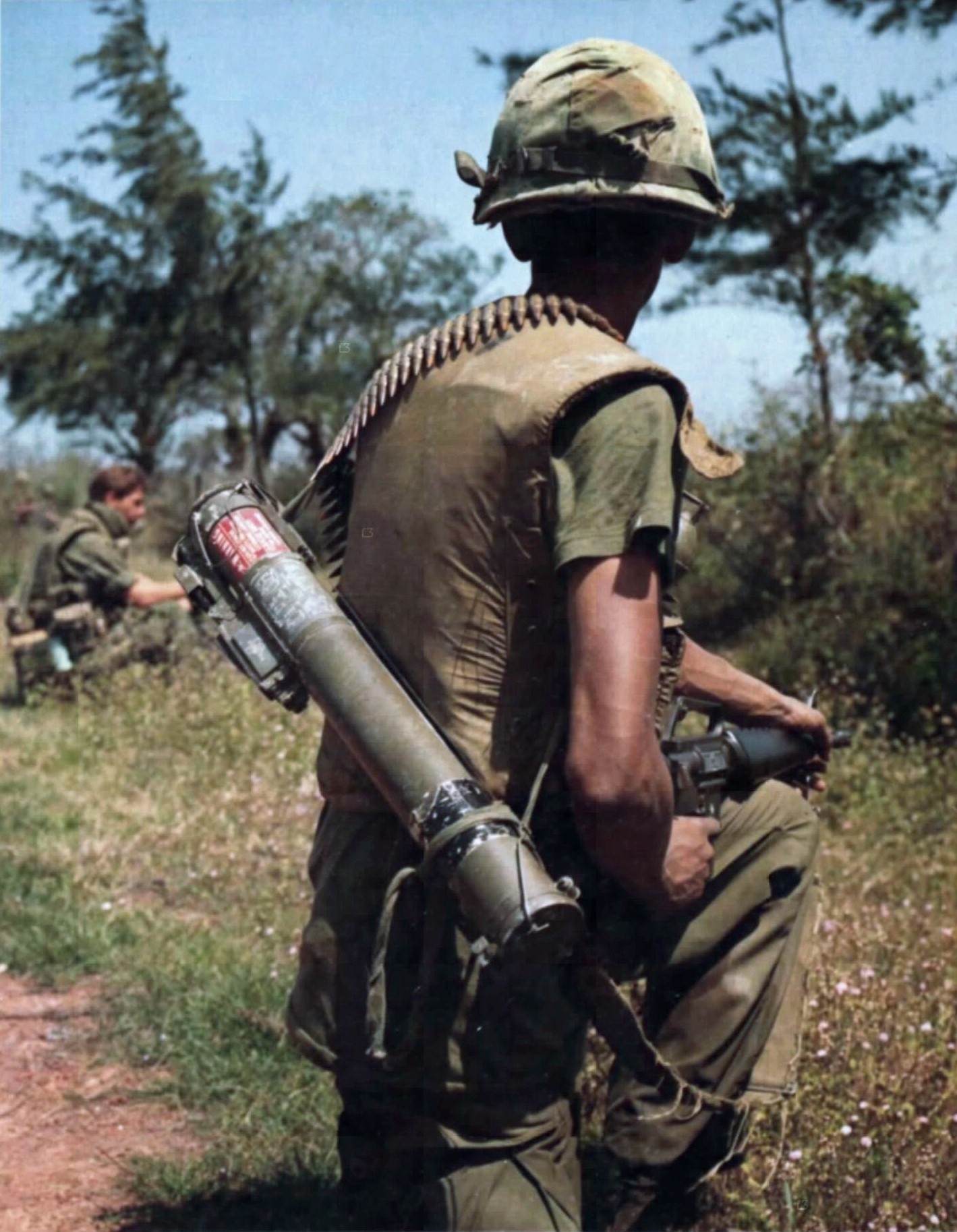 What is this country about now? Where have we been these last decades, and have we been on the right side of history? The American war in Vietnam was sustained through a succession of lies to the American public. Eventually a collective opposition brought that tragic and criminal chapter to a close, but this is not how it is always taught.
Our country can learn from how South Africa has tried to reconcile with its past.  An American Truth and Reconciliation Commission would go a long way toward healing the divisions in this country over its past wars.  We can also learn from how Japan and Germany regarded their soldiers who fought in their wars of aggression- since the Second World War, both countries have turned away from Nationalism and uniformly renounced the extremism of that generation.
By comparison, time and again, America has not come to terms with its past.  Unbelievably, Columbus Day remains a national holiday.  Andrew Jackson is still on the twenty-dollar bill.  We still have memorials to Confederate soldiers and Confederate flags- “the American swastika”- all over the South, and there is still disagreement about the morality of what was done in Vietnam.  We remain a divided nation when it comes to that history, and it’s one reason men and women have been willing to fight in subsequent wars, still naively believing the United States to be a force for good.
In Japan stands a war memorial, the Yasukuni Shrine, and whenever a Japanese Prime Minister visits to pay his respects, there are protests from Singapore to Korea, Taiwan to China.  Not only are the soldiers who fought and committed atrocities on the aggressors’ side denied praise, but also those who would give them respect, such as media figures and politicians, are repudiated.
Wars are and have always been a descent into madness. Time and again, ordinary people become capable of great brutality. If violence is necessary, it should only proceed as a last resort when every other effort to secure peace has failed. That is the standard on which the entire spectrum from left to right agrees. Where we part ways now is in the struggle over telling our history. This is what brings us to where we see ourselves today, and to what we feel is either justified, or a grave violation of human rights.
One biography of the humanitarian photographer W. Eugene Smith is entitled Let Truth Be the Prejudice, and it is only if we can arrive there in our dialogue that all of our interests would be served. We do not have a venerable tradition of debate in this country of ours – instead we have the left and right each preaching to their committed choirs, so sure of themselves and having nothing but insults for the other side.
I’ve given up on trying to change anyone’s mind about anything politically. In all my years, I’ve never seen someone change his or her point of view because of an argument. Instead, what I continue to hope for is that people will make an effort to become educated and not just cling to their opinions or blindly believe what they have been told. In each generation, where there is disillusion about what the government sold us, we advance. There is anger first, yes, and there is grief, but there is finally redemption.
Praising the modern soldier faces in exactly the opposite direction; it faces away from justice, away from healing. By this action, the left has become the right in its support of war carried forward by innocent hands. This new extreme, well-intentioned but misguided, is a cataract, a moral blindness that serves neither the soldier nor his or her victims. It is the opiate of Nationalism that needs the radical cure of respect, love, and care for all humanity. Through this healing, true scales are set; we teach, and actions have consequences on every level, from president to private.