Israel’s Prime Minister, Binyamin Netanyahu, said yesterday that he will be speaking for “the entire Jewish people” in his controversial speech before Congress on March 3, anointing himself as leader and representative of all Jews – including the majority of American Jews who oppose his politics on Iran.
Witness the chutzpah:

“I went to Paris not just as the prime minister of Israel but as a representative of the entire Jewish people,” Netanyahu said, during a conference for French-speaking Likud activists. “Just as I went to Paris, so I will go anyplace I’m invited to convey the Israeli position against those who want to kill us.”

There is much to unpack here, and I will attempt to do so in a point-by-point response below:
1) From a purely political perspective, Netanyahu’s claim to be the voice for world Jewry, by virtue of being Israel’s leader, is preposterous. In Israel alone, only 23 percent of the 6.1 million Jews who live there voted for Netanyanu (Likud), while the world’s remaining 7.7 million Jews did not cast a ballot for the man as citizens of other nations. For those keeping score, that’s 1.3 million Jews out of the world’s 13.8 million who voted for Netanyahu.
On the issue of Iran – the issue Netanyahu will speak upon before Congress on behalf of “the entire Jewish people” – 52 percent of American Jews embrace President Obama’s diplomacy with Iran and reject Netanyahu’s approach, including those Jewish members of Congress who will be boycotting Netanyahu’s address. Not only that, more global Jews (4.6 million) voted for President Obama than global Jews (1.3 million) who voted for Netanyahu.
In other words, this (via Occupy Judaism) if you’re feeling snarky: 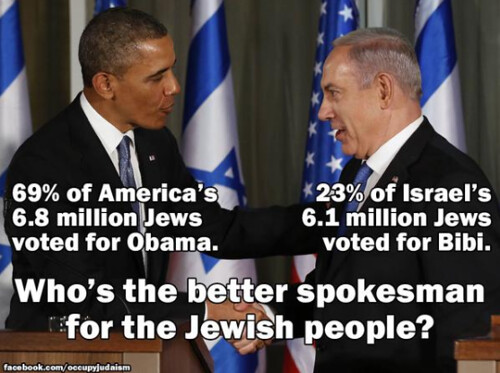 2) From a socio-religious perspective, what Netanyahu has done is not just offensive, but dangerous. As I’ve written in the past, conflating Israel and all Jews is an anti-Semitic trope that the world’s most vile hate-mongers often use. For by conflating Israel with world Jewry, anti-Semites can use Israel’s disastrous policies (such as its ongoing occupation & oppression of Palestinians) as occasions and motivations to target and attack random Jews.

Netanyahu, by casting himself as the leader of “the entire Jewish people” due to his seat in Israel’s government, simply strengthens this anti-Semitic trope.
Is it any wonder that such a conflation can happen when Israel’s leader feeds into it for perceived political gain?
3) When Netanyahu went to Paris to represent “the entire Jewish people” at the Charlie Hebdo march, he did so as an uninvited, unwanted guest who, in the most undignified of ways, pushed himself into the limelight. Both figuratively and literally. All of it to promote his political standing domestically as a serious world leader.
Now, after breaking diplomatic protocol and scheduling a visit behind President Obama’s back, he will be speaking before Congress on March 3 as an unwanted guest by the President and much of Congress. And again, he will be doing so to promote his political standing domestically as a serious world leader while simultaneously harming Israel’s relationship with the U.S. by turning the country into a political football.
Netanyahu Does Not Speak for Me
Netanyahu has a history of claiming to speak for me, and all Jews, by virtue of being Israel’s leader. In his mind, Israel is the Jew amongst the nations, and as such can stand in for all of the world’s Jews. This is the exact same idea the Anti-Defamation League (ADL) has been promoting for years to shield Israel from reproach, motivated by the idea that critiques of Israel, the Jew amongst the nations, should be viewed as anti-Semitic attacks on all Jews.
However, Netanyahu will never speak for me, nor most of America’s Jews, simply because he is Israel’s Prime Minister. Not with regard to Iran. Not with regard to Israel’s continued occupation of the Palestinians. Not with regard to Israel’s expansion of settlements. Not with regard to Israel’s disproportionate destruction in Gaza and continued blockade. Not with regard to Israel’s rejection of diplomacy.
Netanyahu will never speak for me. For Israel and the entire Jewish people are not one and the same. This is something Israel’s own Declaration of the Establishment of the State of Israel recognizes.