Field researchers for B’Tselem, an Israeli human rights organization, recently photographed scenes of destruction in Gaza and conducted interviews with Palestinians during a moment of calm.
The images reveal the magnitude of destruction in Beit Hanoun, one of the hardest hit neighborhoods in Gaza, where residential sections have been reduced to rubble. The accompanying testimony, which I’ve interspersed below, reveal intimately the human toll represented by B’Tselem’s photography. 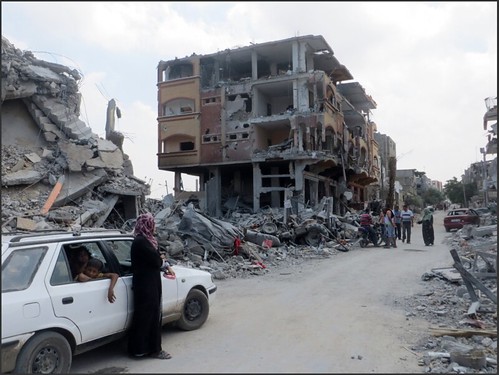 On July 25, a call came in to Beit Hanoun’s medical emergency center, with civilians in the street reportedly injured. After confirming coordination with the International Red Cross, which should have ensured the medical staff’s safety, an ambulance raced to the scene, only to be struck by an Israeli tank shell before reaching the injured. A second ambulance went to rescue the injured medical staff after again coordinating their departure with the International Red Cross.
Below is the ambulance driver’s, Rami ‘Ali, account of that moment:

I drove the second ambulance, and there were two medics with me – Muhammad Harb, 31, and Yusri al-Masri, 54. The street is only about 200-300 meters from the call center, so we were there within minutes. When we reached the entrance to the street, we were surprised to see three tanks and a military bulldozer in the street, about 100 meters away.
Suddenly, with no warning, they opened heavy machine-gun fire at us. The bullets penetrated the ambulance. I tried to turn the ambulance around to get out of there, but the steering wheel must have been hit. Suddenly, I felt sharp pain in my leg and realized I’d been hit by a bullet or shrapnel. Then the windshield shattered. Because I couldn’t turn the ambulance around, I decided to try reversing. They kept firing as I backed up, until we got far enough away. When they stopped, I managed to turn us around and head back to the center.
On the way there we met Hatem Shahin, one of the paramedics from the first ambulance. He’d been hit by shrapnel in his shoulder and leg. He told us that a shell fired from a tank had hit the front part of the ambulance. He said he’d managed to get away but the other paramedic, ‘Aaed, had been hit. He told us that after he ran away from there, he saw the tank fire another shell at the ambulance, completely destroying it. He thought ‘Aaed must have been killed, but we didn’t know for sure.

When a brief cease fire eventually allowed staff to inspect the destroyed ambulance, Aaed’s body was found in the wreckage. 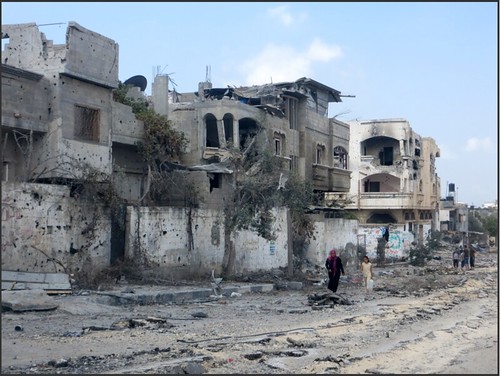 Suhair Shabat, a mother of five young children whose husband works as a journalist, lives in Beit Hanoun. After much internal wrestling, she fled her home, unsure of where to go and whether doing so would lead her family to safety or certain death.
This is her voice just before fleeing:

Things are getting progressively worse. There are air strikes as well as shelling from land and sea. Several houses in our area were bombed and people were injured and killed. I can no longer keep up with the names of all the casualties. I feel like my memory isn’t working properly. Since the war began, I haven’t really been able to sleep. Last night, I didn’t manage to sleep at all, not even for a moment.
The children keep screaming and crying because they’re afraid. They hold on tight to me. It really upsets me to see them this way. I can’t do anything to calm them down and I feel like I could lose them any minute. I cry quietly so they won’t notice.

Eventually, Shabat fled on foot and by taxi to her sister’s house, already hosting three other families, where they escaped the bloodshed despite the bombings in that neighborhood as well. 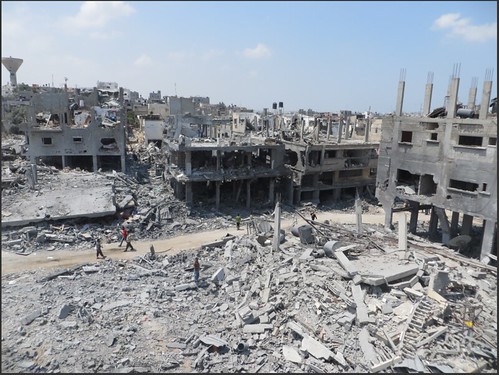 Shadi Taleb, 29, is a married father of two who lives in Beit Hanoun. Here he describes difficult moments fleeing with his family, which includes witnessing a family of eight killed by a missile strike:

Since the Israeli offensive on the Gaza Strip began, our lives have become very hard. We can barely find food for our children. There’s no milk for the babies and hardly any drinking water. There’s no way we can work, and we barely sleep.
On Friday, 18 July 2014, at around 9:00 P.M. – about two hours after we left our home in Beit Hanoun, at the time of the second evening prayer – I heard a loud explosion. A house nearby, about 30 or 40 meters from where we were staying, was hit. I think it was an artillery shell. It landed in the backyard of that house. About 20 people from the Abu Jarad family lived there. About 30 seconds after the first shell, another shell hit one of the walls of the house and caused a lot of damage.
I went outside and ran over to the house that had been bombed. A lot of neighbors came as well. We started carrying the wounded to ambulances, which arrived quickly. After we were done carrying everyone out, we found out the results of the shelling: eight family members were killed and four were injured. I found that I knew some the people who had been killed. I knew ‘Abd a-Rahman Abu Jarad, his wife, Rajaa, and their two children, a 6-month-old baby and a 6-year-old boy.
Things in all of the northern Gaza Strip are getting harder and more dangerous. I think we’ll have to leave here as well and move again. We don’t know where to go next. How long can we keep this up? Only God knows. 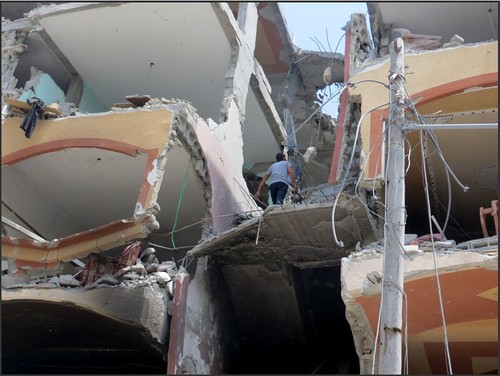 Muhammad Hamad, 75, was sitting with his extended family on sofas outside his Beit Hanoun home, a regular custom, especially during Ramadan, when the family gathers together. This is his difficult recounting of a missile strike which killed and injured many of them as they sat together on the evening of July 8.

We sat and talked. At 11:00 P.M., the power was cut off because the electricity supply runs on rotation. We sat there a while longer and then I got up and called the little ones – Rakan, Nur and Kinan – to come inside with me to get ready for bed. We went in to the house, spread out our mattresses and sat on them for a while. Then Rakan and Nur got up and went to the door leading to the yard. Kinan stayed inside with me.
About three minutes later, I heard a loud explosion. I grabbed Kinan and went out into the street with him. It was full of smoke and dust. I walked on bits of glass. I left Kinan with people in the street and went back into the yard to check on the rest of the family. I found bodies lying on the ground covered in blood, with their clothes torn. Everything was full of shrapnel and blood. Some neighbors came with flashlights. When they lit up the yard, I was shocked – I saw the bodies of my three sons, ‘Abd al-Hafez, Mahdi and Ibrahim, my wife, my granddaughter Dina, and my daughter-in-law Suha. The two other little ones, Rakan and Nur, were lightly injured.
I went into shock. The neighbors held me because I couldn’t stand. I felt like I was going to faint from the horror of it. The missile fell on my family with no warning. I assume they wanted to hit ‘Abd al-Hafez (his son, perhaps a Hamas fighter), but what did the rest of the family do wrong? Why did they kill an entire family? 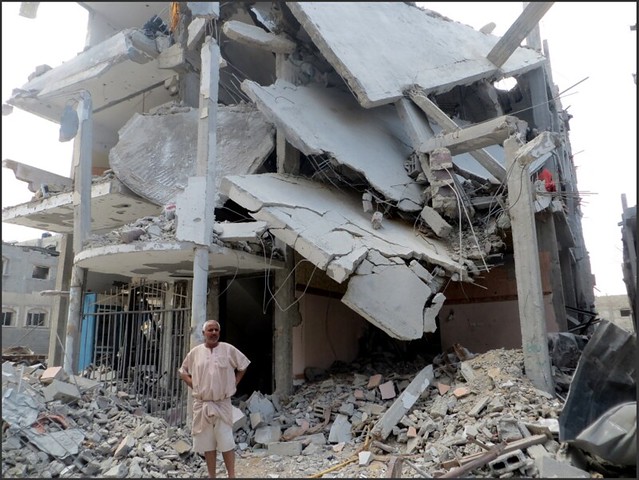