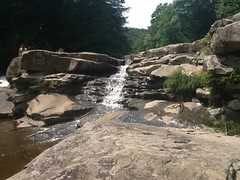 I’m sitting beside a breathing river, listening to my children conjure rapids with their feet, imitating those forming downstream. A waterfall behind us is telling secrets. The sky is reflective, a deep azure telling the world it wants to hold nothing. At least, not today. I nod my head in agreement. Neither do I, I think. That’s why I’m here.
I’ve come to these familiar mountains in Western Pennsylvania for a brief escape from the thunderclaps of war reverberating from Israel and Gaza, and from the tension I feel for speaking out, for critiquing that war. I’m lucky in that I can remove myself from the computer’s glare, the cell phone constantly ringing, and my urban neighborhood. But I also realize this: there’s no real escape. Not for me, anyway.
A blue heron flaps overhead, and I recognize loneliness settling in, the type of existential loneliness about which Louis C.K. loves to joke. Because the only way to survive is to laugh about it.
Or to ignore it.

I typically choose the latter, a method electricity does wonders to support. However, out here in the wilderness all I can do is to sarcastically chuckle and throw a grass blade into the water, watching to see if it will reach the spillover or become perpetually trapped in an eddy along the bank. Moving circularly. Going nowhere. 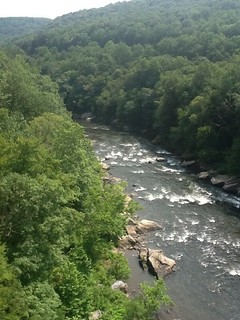 If I believed in a divine history, I’d worry — as some have recently — that God’s pending exile of my people from the Land of Israel is being signaled by Israel’s killing of 1,900 Palestinians, the troubling rise of societal racism, the unending occupation, and the slow death of empathy from a forever war.
However, I don’t believe there is anything divine about a political state. Just as I don’t believe there is anything divine about the genocidal context from which that state emerged, a context which killed half my family. Israel’s creation was certainly unlikely. But miraculous? The word holds too much, unlike the sky above me.
Now, divine irony is an idea I could get behind. But only because I’d appreciate a sarcastic God. It would be one way to explain how such a beautiful world could be full of so much pain and perpetually reversing roles.
When I return to the world from which I’m currently taking refuge, I know that nothing will have changed. Palestinians will still be dying in the West Bank and Gaza. Rockets will still be falling in Israel. My inbox will be overwhelmed by those both praising and spewing hatred at my refusal to think in binary terms about the conflict. By those calling me either a hero or an anti-Semite, neither of which are in any way accurate.
I know these things await my return.
And I also know this: words matter. Many have told me that these words matter greatly, that they are making a difference. Which is why, reflecting upon the past month, my toes dipped in spring-chilled water, I’ve decided that— despite pressures which exist to refrain from doing so — I will continue to write openly and honestly about Israel and Palestine. I will do so as a committed Jew and as a progressive American. As a father who wants for others what I have now: children playing freely, splashing in the water without fear.
The waterfall behind me is hissing benignly, telling me that my decision is sound. Yesss, it says. Which is perhaps the renewal or rejuvenation I was seeking all along. For the world to nod, for an inner voice to nod.
I nod back, pick up my backpack and brush off my pants. It’s time to hike, to set up camp along the trail, to feed and be fed.

Author’s Note: This was written with a pen and paper on August 7. Yes it’s solipsistic. My apologies. I am a memoir writer, after all.