There are visual moments which have the capacity to shift perceptions and increase awareness in ways that are unmatched by words or data. Moments captured on film which are fleeting, but remain indelible long after they’ve passed. Such a moment occurred on Friday in the West Bank, the images of which are spreading rapidly.

As seen in the image above, it is a difficult moment which occurred during Friday’s weekly anti-occupation protest in the West Bank village of Nabi Saleh. An Israeli soldier chased down twelve-year-old Mohammed Tamimi, whose arm had been broken in a previous demonstration and who was accused by the soldier of throwing stones. As Mohammed was being dragged away, his fifteen-year-old sister, mother, aunt and members of the Tamimi family began screaming to the soldier that he’s a minor, and that his arm is broken, before physically tearing the soldier off of Mohammed during a struggle.
An image of this difficult moment can be seen below, and video of the incident in its entirety here: 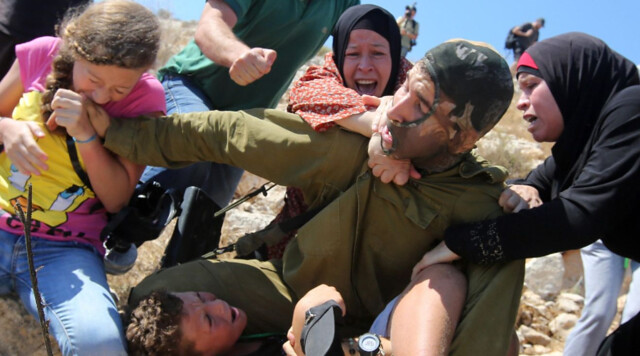 The soldier was eventually led away without the boy by another soldier, but not before tossing a tear-gas grenade among the gathered Tamimi family.
This is what life in the occupied territories is like during protests and demonstrations, a life most people in the United States and elsewhere don’t see, certainly not on mainstream outlets. This is the life of the Tamimi family, which has been struggling against the theft of their village’s freshwater spring by a neighboring settlement for five years.
Every Friday, entire families march in their village against the theft of their land, and nearly every Friday―as happens elsewhere in the West Bank during non-violent protests―the Israeli army attacks, predictably eliciting rock throwing by the angry and injured. Here is an account of Nabi Saleh from 2011 which, unfortunately, remains mostly accurate four years later:

The army does not even wait for the demonstrators to get out of the village. The Israeli army simply goes into the village and starts shooting at anything that moves – rubber-coated metal pellets, gas canisters, and other things. Sometimes it sprays entire streets with putrid skunk water: the houses, the windows, the potable water stored on the roofs. Not only is this collective punishment, this policy exposes the true provocateur: Village residents, who demonstrate without threatening any Israeli? Or the army, which invades their streets? (A quote from the testimony of Hedva Isscar: “The first gas canister was shot at us before we had time to get out of the village.”)

Also common in Nabi Saleh and elsewhere are random, midnight raids into family homes, performed under the guise of investigations but intended to punish Palestinians for protesting with sleep deprivation.
These things have been happening for years, and yet many Americans are unaware of what takes place in the West Bank, the rights denied and brutality exacted.
Unfortunately, it takes indelible moments like the one which occurred on Friday to shake people from their slumbers. Here’s to hoping that this moment is indeed such an incident, for the sake of both those Palestinians being oppressed and for an Israel crumbling―politically, socially and economically―under the weight of its ongoing military occupation.