Growing up outside of Atlanta, I learned to crawl with Bob Dylan’s “Only A Pawn In Their Game” as my soundtrack, anti-war posters hanging on the walls, beckoning me and my raw knees forward. I was weaned with the voice of Martin Luther King, Jr. reverberating down the narrow halls of my parents’ apartment, formed my first words as though delivering a soliloquy on equality.
In first grade, I asked the teacher if the ‘Indians’ still celebrated Thanksgiving. When she asked why I wanted to know, I responded, “Because the people they ate with took their land,” something I’d learned from an honest mother. During a Little League game, my father intervened when coaches tried to initiate a prayer circle, wanting us to give thanks in Jesus’ name. He fiercely believed in the separation of church and, well, everything.
As an American Jew, I was mostly instilled with progressive values as a child. Rather, I was instilled with progressive, American values – particularly those which aligned with liberal, Jewish ones. A love of social justice, human rights, equality. A disdain for racism, fundamentalism, colonialism. Sure, I attended Hebrew school, but my scripture was more the Bill of Rights than the Torah, and my anthems came from hip-hop and rock, not the Book of Psalms (תהילים).
Despite this, my early love for progressivism was accompanied by a love for the State of Israel. As a short, Jewish kid who wanted to be an NBA star, I was naturally inclined to root for the underdog. And at synagogue, we were taught that Jews were the ultimate underdogs, miraculously surviving the Holocaust and a history of oppression to create a contemporary “light unto the nations” which fought with dogged determination against evil and had a cool flag. And I was taught that I was vulnerable, that there were people who wanted me dead, and that Israel was a safe haven, a beacon, a garden to which I could always escape.
Palestinians, accordingly, were portrayed as just one in a series of people who have risen up throughout history to destroy us, being painted as a caricature of evil. As a boy, I nodded and understood. Israel was not just good, it was necessary.
One Sunday morning, my parents dropped me off at our local, liberal synagogue for what was billed as the youth group’s pancake breakfast. Once inside, we were surprisingly herded into a multi-purpose room and sharply ordered to sit against the walls by masked men carrying plastic assault rifles. Stale bread was thrown on the linoleum floor toward me and my friends, perplexed and unsure what the hell this was all about, but smart enough to know it was not actually a dangerous situation. Younger children started crying.
This is what the enemy is like, some teachers told us when it was over.
I nodded. We were the good ones.

As an adult, I’ve moved away from such naiveté while holding on to both my Zionist and progressive leanings, despite the growing struggle for coexistence between the two. And it’s not as though I’m mildly informed about the region or mildly invested in Israel and my Jewishness. The opposite, in fact, is the case. I’m a Jewish studies teacher at a day school, yeshiva-educated with a master’s degree from Hebrew University in Jerusalem. I’ve authored a memoir about my experience with terror and reconciliation, and write extensively about the region, often critiquing Israel from a progressive perspective while maintaining my desire for a two-state solution to the conflict.
As an adult, I’ve learned about the cleansing of Arab villages which took place from 1947-1949 to make way for the Jewish state. I’ve learned about the ongoing settlement enterprise, the appropriation and bifurcation of Palestinian lands. I’ve learned the horrors of Israel’s decades-old occupation of the West Bank, about the suppression of basic human rights and the atrocities committed. I’ve studied Israel’s use of indefinite detentions, home demolitions, restrictions on goods and movement, and the violence visited upon those being occupied.
I’ve learned that – and this is just one example of many – a Palestinian child has tragically been killed every three days for the past 14 years. That bears repeating, since such deaths are rarely, if ever, given any attention in America: Palestinian parents have had to bury a child every three days for the past 14 years.
Knowing all this, I’ve still held fast to my ‘progressive Zionism,’ hoping Israel could become that beacon of liberalism I was presented as a child, a beacon which never truly existed in the first place, despite the country’s socialist roots. Why have I done so? For two reasons: 1) deep down, I still believe in the promise of Israel, and 2) I can’t shake the notion that a Jewish state is absolutely necessary for our security.
Over the last decade, I’ve formed alliances with progressive Americans and the Israeli left, working in my own, small ways to try and move Israel away from those illegal, geopolitical policies causing so much suffering for Palestinians and undermining Israel’s ability to not just thrive, but survive. All the while, I’ve watched the anti-war movement in Israel weaken, watched racism flourish and religious fundamentalism grow, watched Israel’s government build settlements at a record pace and make clear it has little interest in peace.
These realities have forced me to consider the incongruity between my American-borne progressivism and my Zionism. They have forced me to admit, like Peter Beinart, that in order to continue supporting Israel as a Jewish state, with everything it continues to do, I must compromise my progressivism.
However, the mind-numbingly horrific events of the past week have forced me, for the first time, to wonder whether such compromising can be sustained.

What has happened? This: on June 12, three Israeli teenagers were kidnapped while hitchhiking in the West Bank by Palestinians belonging to a rogue branch of Hamas. I, along with friends and loved ones, worried they would become three more Jewish victims (added to the 1,100 killed since 2001) in an unending conflict, and watched closely as the Israeli military began combing the West Bank for them. Only, it soon became clear that soldiers weren’t looking for them so much as collectively punishing Palestinians for the crime of a few people. Prime Minister Binyamin Netanyahu falsely blamed the kidnapping on Hamas – a move likely aimed at derailing the PA-Hamas unity government – and vowed they would “pay a heavy price.” But it was Palestinian civilians who paid a heavy price as for weeks soldiers raided over 1,600 sites in the West Bank, indefinitely detained hundreds, and killed five Palestinians.
Israel placed a gag order on details surrounding the teens’ abduction, and reports surfaced that Israeli officials knew the boys were dead, but wanted to justify ongoing military operations under the hope of bringing the boys back. (Alas, it seems such reports may have been accurate.)
And then, on June 30, the tragic news suddenly came: the three teens had been found dead. And just as suddenly, calls for blood and vengeance echoed from Israel, starting with Netanyahu, who turned a Chaim Bialik poem on its head by using it to call for blood: 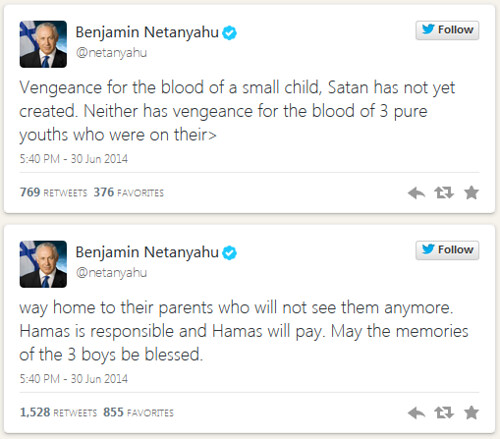 In turn, calls for blood and revenge began echoing throughout Israel and on social media, with a Facebook page dedicated to such calls quickly receiving 35,000 likes. It featured soldiers posing with weapons, asking for permission to kill, along with countless Israelis calling for revenge: 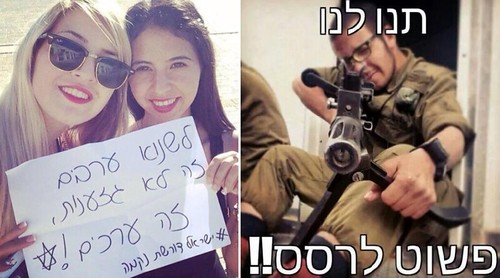 On the left, Israelis hold a sign that reads,"Hating Arabs isn't racism, it's values! #IsraelDemandsRevenge," while on the right, a soldier post a picture with the caption, "Let us simply spray (them with bullets)."

After the funeral for the three slain Israeli teens on July 1, angry mobs of hundreds began roaming the streets of Jerusalem chanting “Death to Arabs,” attacking Palestinians and promising bloodby nightfall.
Chemi Shalev of Haaretz, witnessing the genocidal chants from Israelis and reading reports of Israeli police saving Palestinian citizens from the mobs, wrote the following:

Make no mistake: the gangs of Jewish ruffians man-hunting for Arabs are no aberration. Theirs was not a one-time outpouring of uncontrollable rage following the discovery of the bodies of the three kidnapped students. Their inflamed hatred does not exist in a vacuum: it is an ongoing presence, growing by the day, encompassing ever larger segments of Israeli society, nurtured in a public environment of resentment, insularity and victimhood, fostered and fed by politicians and pundits.

By nightfall, with the ink of Shalev’s pen barely dried, horrific news came that a Palestinian teen from East Jerusalem had been abducted and killed by Israeli settlers in an act of revenge, with reports revealing the unspeakable: he was likely burned alive.
Since that night on July 1, parts of Israel have been burning, and clashes between Palestinians and police in Shuafat, the East Jerusalem neighborhood where the killed teenager lived, have been particularly intense. The police have been unrelenting, raining rubber bullets and tear gas down upon a grieving neighborhood. And the scenes have been difficult to watch.
Perhaps the scene that has put me over the edge is one that should hit close to home: an American teenager from Tampa visiting Israel, who happens to be a cousin of the slain Palestinian teen, was almost beaten to death by police, ostensibly for throwing rocks, and remains in Israeli detention. [Video of the incident.] 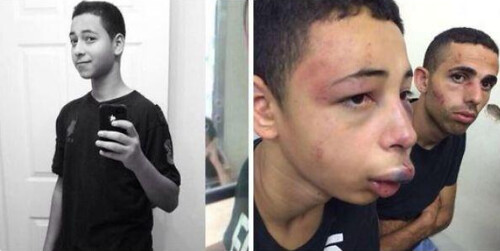 I have no words.

There are parts of me right now that feel defeated. Yes, there have been calls for peace and the denouncing of extremism in Israel, but such calls feel as though they have been drowned out by those still craving revenge. And as Shalev notes, this isn’t an isolated incident – this is the result of a real shift in Israeli society concurrent with the ongoing occupation.
The past week’s events have shaken me to my core, and have forced me to look long and hard at my personal politics. For if this were any country but Israel, my progressive values would not allow me to support, much less love, such an enterprise. Yet the reality is this: I do.
I’m not ready to abandon the dream of a Jewish state that lives up to its democratic promises, and continue to hold tenuously onto the idea of two states for two peoples. However, I have begun, for the first time, to consider what a single, bi-national state might look like, to consider that it might finally end this madness.
And here’s the irony: Israel’s extreme-right leaders, embracing various one-state solutions, have forced me to do so. Hell, Israel just elected as its President a one-state proponent. How can I not consider what that might look like?
As it happens, during all of this, I’ve just finished Ali Abunimah’s The Battle for Justice in Palestine, which makes an impassioned case for a democratic, bi-national state as the only way to end this conflict.
The progressive American in me agreed with much of his arguments. The Zionist in me was scared by its premise.
The humanist in me just wants all of this to end. Wants all of the suffering and pain on both sides to end.
If not now, when?

54 thoughts on “As a Jew living in America, the past week has changed me forever”