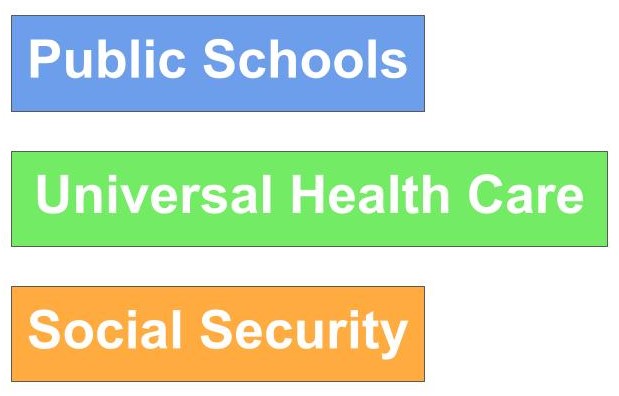 [Editor's note: Swanson is entirely right about the need to make progressive programs apply universally so as to widen their base of support. But they will still get nowhere as long as the capitalist class believes that it must make sure that government is shown to be ineffective and too expensive, and as long as the ethos of the capitalist marketplace is daily internalized by most Americans. The precondition for success with universality is a new ethos of generosity and caring for each other. How to get there is the subject of my book Revolutionary Love--info at www.tikkun.org/lj. Consciousness change comes first before progressive programs have a chance--that is why we stress the importance of our proposed "New Bottom Line" and our conception of "The Caring Society--Caring for Each Other and Caring for the Earth" --it is fine to advocate for the specific programs mentioned in Swanson's piece, but the campaign for those would be far more effective if contextualized alongside the vision of the New Bottom Line and the Caring Society which we at Tikkun and the Network of Spiritual Progressives are trying to convince progressives to adopt. Just as changes in the status of women and LGBTQ were taken more seriously once the critique of patriarchal institutions and practices became widely understood, so too the liberal/progressive agenda will be taken far more seriously when accompanied by the discourse of the New Bottom Line and the Caring Society.

Universality or Fighting Over Scraps

I don’t claim to have a universal answer to all such questions. There are some questions that I would certainly answer differently if they stood alone. If the rotten U.S. political system were condemned to remain unchanged except in one single regard, then, sure, I’d vote for slavery reparations. By the same token, I’d vote for term limits just to get different corrupt faces into the news, rather than working to make it possible to unelect incumbents.

But I think that there is a consideration being missed by all of these questions, and that it is an extremely important one that usually ought to tip the balance. It is the value of universality. It’s not a theoretical value. It’s what makes Scandinavia a desirable place to live. It’s what makes Social Security and public high schools so popular. It’s why people campaign for Medicare for All, not Medicare for the Worthy. It’s why we’re outraged at the idea of a fire crew asking to see paperwork and check qualifications before putting out a fire.

Universality does a number of things that means-tested programs for certain people do not.

It creates no stigma for those receiving something. That something is not a hand-out but a human right.

It creates no resentment for those not receiving something, because there is no such group. Every service is made available to everyone it might possibly serve should they desire it.

It avoids the costly and massive bureaucratic inefficiency of determining who qualifies and who doesn’t.

It builds solidarity, and encourages a politics in which larger groups can unite to make further changes.

It discourages, not just resentment of actual beneficiaries, but also irrational prejudice against particular groups benefitting or imagined to be benefitting disproportionately.

It strengthens support for maintaining a program into the future, rather than opening up the means to chip away at it until it’s gone.

Universality works against the ideology that justifies inequality, opening up the possibility of taxing corporate and personal wealth. There’s no way to resent giving relatively tiny benefits to billionaires if you’ve taxed away their billions and there are no longer any billionaires. (And did you really think giving a billionaire $600 was going to have a noticeable impact on things?)

If the U.S. government were to give everyone who wants them, across the board, any or all of these things: top quality education from pre-school through college or trade school, top-quality health care, low working hours, long vacations, family and parental leave, retirement, public transportation, childcare, adult education, greater environmental sustainability, and — if Scandinavia is any guide — as a result, a wider range of opportunity, greater class mobility, more entrepreneurs per capita, more patents, and more creativity, who would complain? Whom would I possibly resent? What group of people could some fascist buffoon get me to take out my rage on? For that matter, what foreign leader could an opposing political party redirect my anger toward? What anger? What would there be to be angry about?

As Robert McChesney notes, universality “is the reason the two most popular and successful federal government programs in the United States—Social Security and Medicare—have been impossible for the right to defeat, even though they have been trying to do so since the moment those programs were created in the 1930s and 1960s respectively.”

McChesney also has a theory as to why there aren’t more such popular programs:

“It is standard procedure for most Democratic candidates to support Bernie style social programs in theory—or at least some of them—but then to insert the caveat that ‘of course, rich people or even people above the poverty line should not get them for free because they can afford to pay for them out of their own pockets.’ It sounds very fair and progressive, a blow against crony capitalism and directing government money to the undeserving rich. It is a staple line regarding the student debt plan of Elizabeth Warren, for example, and is roundly approved by the punditocracy. It is the mark of a ‘serious’ candidate. It is called ‘means testing.’ But means testing is a phony progressivism and a crucial tactic promoted by the right to eliminate social welfare programs that could benefit the population. . . . [A]s soon as means-testing is accepted on principle and introduced for a program, it begs the logical question of why not extend it to other similar social programs? So if means testing free public college tuition is such a great idea, then why not have well-to-do parents pay tuition for their children in public high schools and middle schools and elementary schools? Why not bill only the rich when they drive on any public roads or use public libraries or parks or restrooms? Why not charge them for using the police or fire departments? Where exactly do you draw the line? That is a slippery slope toward privatization and elimination of government functions.”

As noted above, there is an alternative to eliminating government functions, namely eliminating the rich through taxation and the abandonment of government bailouts and benefits that discriminate against everyone except the rich. Taxation should not be universal, should not be “flat,” and should not be regressive as it mostly is now in the United States. It should be progressive. But it should be used to create universal programs — which would be easier without the majority of tax revenue going, as it does now, to wars and war preparations.

Wars aren’t the only thing it’s damn hard to end once started. Universal programs are like that too. Making college part of public education, or making Medicare serve us all would be an accomplishment that would likely last as long as the U.S. government. If Joe Biden wants to be FDR or LBJ (minus the wars please!) he should create something universal and lasting. It would be lasting because it could not be attacked as supposedly only benefitting a certain hated group. Nor could it be attacked as inefficient and in need of privatization. It’s the means-testing bureaucracy that’s inefficient. It’s the privatization solution that’s even more inefficient. There’s nothing more efficient than nonprofit universality.

Why shouldn’t descendants of enslaved people get reparations payments? Because they could get vastly more, and so could everyone else in a non-zero-sum calculation, by transforming U.S. society into a fair and egalitarian place (aiding all in need and taking from all who can spare) rather than courting nasty fascist blowback, building corrupt bureaucracy, and dividing us into a divided people who can be conquered easily.

Why should smokers get health coverage? Because human rights are for humans, the human without a flaw does not exist, and a government agency to identify all smokers is not something I want to pay for or live with.

Why should someone get out of their student debt when I didn’t? Because I’m not sadistic. I do not wish for others to suffer if I’ve suffered, but rather, just the reverse.

David Swanson is an author, activist, journalist, and radio host. He is director of WorldBeyondWar.org and campaign coordinator for RootsAction.org. Swanson's books include War Is A Lie. He blogs at DavidSwanson.org and WarIsACrime.org. He hosts Talk Nation Radio. He is a 2015, 2016, 2017, 2018, 2019 Nobel Peace Prize Nominee. Swanson was awarded the 2018 Peace Prize by the U.S. Peace Memorial Foundation.