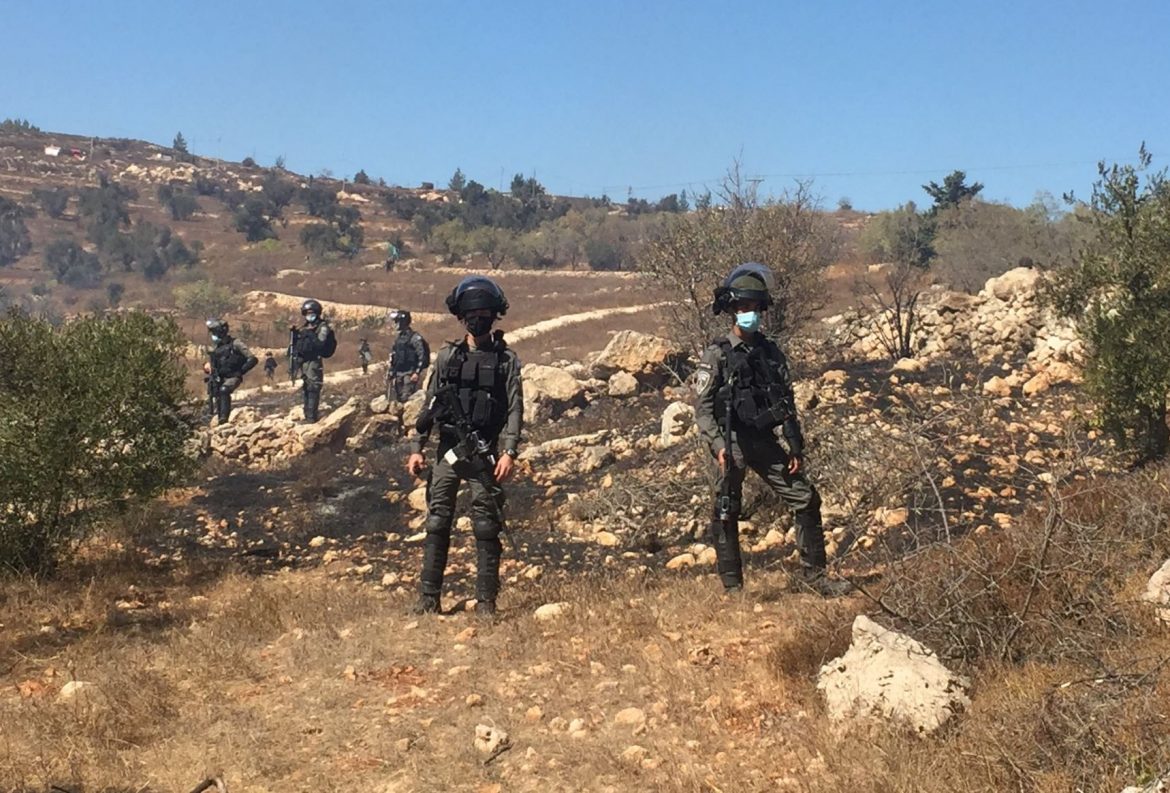 Settler terrorism is on the rise because of the standoffish attitude or actual support by the Israeli occupation forces: this week, another record was set by the settlers vandalizing Palestinians and their property and activists who accompany them, from Jit-Sara Junction (Qedumim) all the way to Hebron, from the West Bank Hill Range to villages, fields and junctions in the districts of Nablus, Ramallah, Salfit, Bethlehem and Tul Karm; On Friday, in A-Tawane in the South Hebron Hills, dozens of Palestinians and over 120 Israeli activists participated in a demonstration protesting the shooting by an Israeli soldier of a villager of A-Rakeez who tried to prevent the army from confiscating a generator – the army dispersed this demonstration by throwing stun grenades; on Saturday settlers invaded Palestinian lands near Susya;  for weeks now the settlers of ‘Mitzpe Yair’ have been invading the lands, homes and tents in the village of Simra, in the South Hebron Hills; an intentional act of vandalism was perpetrated in the vehicle of two activists while they tried to prevent a settler’s cattle herd from invading a sown Palestinian field near Tayibe Junction – an act that endangered the activists’ lives; an activist was hurt by a metal rod while trying to prevent the invasion by settler flocks of the new settler outpost near Deir Jarayer

Protest following the shooting of a villager of A-Rakeez,

Harassment by settlers and Israeli army forces throughout the West Bank

On Monday, January 11, settlers threw stones at Palestinian vehicles near the settlements of Qedumim, Shilo, Tapuach and Yitzhar. According to one of the reports, about 50 settlers blocked a road close to the junction of Jit-Sara (Qedumim) and threw stones at cars. One Palestinian was wounded in the eye. Close to Shilo, at least one truck was hit and its window panes smashed. Near Gil’ad Ranch a settler of the area was hurt in the head by a stone that settlers threw at his car by mistake.

During the night between Monday and Tuesday, settlers were documented invading the privately-owned Palestinian lands neighboring them and planting there in order to take over.

On Tuesday and Wednesday settlers attacked activists who tried to protect Palestinians from incursions into their lands in the West bank Hill Range (see details below).

On Wednesday, January 13, a group of settlers attacked Palestinians farmers of Aqraba and Majdal Bani Fadel (Nablus district) with sticks and stones while the latter were working their fields. According to eye-witnesses, the assailants arrived from the settlement Gitit. A 75-year old Palestinian was hurt in his head and taken for medical treatment.

On Sunday, January 17, a 11-year old Palestinian girl was wounded by stones thrown at her by settlers in Madama (Nablus district). Close to 3 p.m. a group of about 20 settlers came from Yitzhar to the village and threw stones at houses, and one of them hit the girl.

On Tuesday, January 12, occupation forces uprooted dozens of olive trees in the lands of Beit Umar (Hebron district), despite the fact that the landowner declared he holds ownership documents recognized by the occupation authorities.  On Sunday, January 17, another uprooting of olive trees was reported in the lands of A-Rihiya (Hebron district), close to the settlement of Beit Hagai. Details of this incident are not yet available. Throughout the week, the occupation forces issued 5 eviction orders for farmlands west of the village of Deir Balout (Salfit district), close to where the army uprooted about 3,000 olive trees about 10 days ago. In recent weeks the occupation forces have noticeably accelerated their efforts to uproot olive tree groves throughout the Occupied Palestinian Territories.

On Monday, January 11, 6 Palestinians were reported shot by Israeli soldiers by the Separation Fence near Tul Karm. They were taken to hospital with leg wounds varying in their severity.

Close to the Tayibe Junction, on Monday and Tuesday activists documented settlers’ flocks grazing inside privately-owned Palestinian lands that had been plowed just a few weeks ago and began to sprout. Calls to the police led to no results. On Thursday, while the activists tried in vain to make the flocks leave the fields, one of the settlers vandalized the activists’ car and loosened the screws on two of its wheels. When the activists began to drive away, the wheels sprung loose and the activists were miraculously spared a serious accident. They were stuck at the gate of the settlement until late at night. While busy fixing their car, two settlers arrived on horseback, promised to lead their flocks into the plowed fields on the morrow as well, and spat at an activist.

On Wednesday activists returned to Deir Jarayer in an attempt to distance the settlers’ flocks invading Palestinian fields. Settlers from the new outpost there attacked them. An activist was hit by a metal rod. Policemen arriving on the scene detained for questioning several settlers and the attacked activists.

At Auja in the southern Palestinian Jordan Valley, activists accompanied Palestinian shepherds this week, no special incidents were reported.

At A-Tawane in the South Hebron Hills, over 120 activists and dozens of Palestinians showed up for a demonstration on Friday, January 15, protesting the shooting of a A-Rakeez villager 2 weeks ago, when the occupation forces tried to confiscate his neighbors’ generator. The Israeli army prevented the demonstrators from arriving at the site by throwing stun grenades, and soldiers violently arrested an elderly Palestinian, inhabitant of the area. At the end of the demonstration, a group of settlers proceeded in the direction of A-Rakeez. The inhabitants and activists with them demanded of the numerous army and Border Police personnel present to distance the settlers from the village lands, but the forces preferred to ‘protect’ the settlers and distance the villagers and activists with another round of stun grenades. The demonstrators refused to disperse until the settlers left.

On Saturday morning, the army concentrated large forces at the Susya junction, probably because of prior knowledge about settler plans. Indeed, soon enough a report came in that dozens of settlers invaded privately-owned Palestinian lands in Wadi Tawamin near Susya.  Activists arriving there discovered that the army had caged the Palestinian landowners behind a fence, and enabled the settlers to remain on privately-owned land that is supposedly out of bounds for Israelis by official orders. A Palestinian activist tried to demand of the military commander to remove the settlers from the closed area. In response, the officer tried to chase him and other Palestinian activists away as they documented the goings-on. They insisted that their presence was allowed whilst the settlers were the ones present in an area that is closed to them by official decree. The officer refused to enforce this decree, even when it was shown to him on the Palestinian activist’s phone. Only after a Civil Administration official arrived, did the settlers agree to leave. At night once again a group of settlers tried to invade the same lands, but this time the army prevented them from doing so.

At Simara, a group of activists accompanied Palestinian farmers who intended to plow their lands close to the ‘Mitzpe Yair’ outpost. Settlers of the outpost chased the Palestinians from their own lands, invaded the village, and entered yards and structures in it. A military force present on the spot accompanied the settlers among the village houses and tried to convince them to leave, but was not assertive. Only when more activists from the area arrived, was a closed military zone order issued and the settlers left. Simara has been suffering for weeks now from ‘visits’ of settlers of the outpost at all hours of the day and night, and according to the villagers, one night this week a settler used a knife to cut a piece of one of the dwelling tents in the village. At the villagers’ request, activists spent the night there in order to protect them.

On Monday this week, activists demonstrated opposite the military court at Ofer army base, in protest of the arrest of a Palestinian activist who took part in the demonstration at A-Rakeez last week. Large occupation forces arrived but enabled the protest to take place.

Please make an effort to register no later than Thursday evening, so we can organize the transportation and the activity properly. Please bring an ID/passport, a hat, water and food for the day.

It is advised to take into consideration cultural differences in the choice of clothing.

In Jerusalem earlier this week the occupation forces demolished a structure at Anata.

The weekly protest in Sheikh Jarrah takes place every Friday. The residents of Sheikh Jarrah are protesting their violent evictions from their homes, the taking over of the neighborhood by the settlers, and the Judaization of East Jerusalem. They call upon each and every person who supports their struggle to join them

We will meet at the Sheikh Jarrah Garden, Nablus Road and Dahlmann St. at at 3 p.m