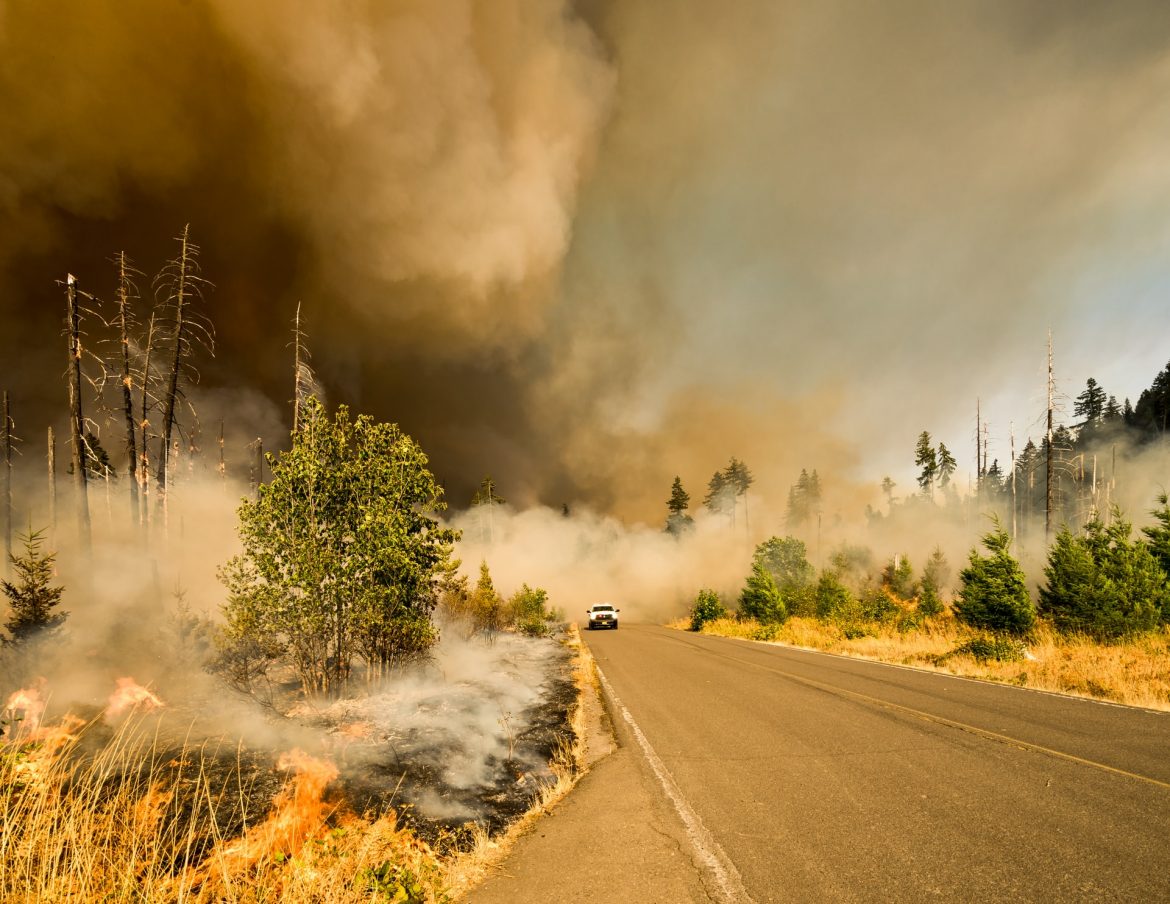 The greatest threat to humanity today is arguably climate change. We are on a path that could lead to an uninhabitable world by the end of the century unless major, transformative changes soon occur. And disaster might strike even sooner if self-reinforcing positive feedback loops (vicious cycles) in the climate system cause global warming to spin out of control.

An outrageous exaggeration, like the doomsday scenarios of the past? Not according to science academies worldwide, 97% of climate scientists, and virtually all peer-reviewed papers on the issue in respected scientific journals, all of which argue that modern climate change is largely caused by human activities and poses a dire threat to humanity.

An October 2018 report by the Intergovernmental Panel on Climate Change (IPCC), an organization composed of leading climate experts from many countries, asserted that “there is no documented historic precedent” for the scale of changes needed by 2030 to avoid a catastrophic climate future.

The world is already seeing the many negative effects of climate change. Contrary to the views of many climate-change deniers, the world’s temperature has significantly increased in recent years. Every decade since the 1970s has been hotter than the previous decade and all of the 20 years in this century are among the 21 hottest years since temperature records started being kept in 1880, the only other year in the top 21 years being 1998. 2016 was the hottest year globally, breaking the record held previously by 2015 and before that by 2014, the first time that there have been three consecutive years of record world temperatures. And, 2020 is on track to possibly become the hottest year.

In efforts to reduce temperature increases and other negative climate effects,  leaders of 195 nations, including the U.S. and Israel, attended the December 2015 Paris Climate Change conference. They all agreed that immediate steps must be taken to avert a climate catastrophe and most of the nations pledged to reduce their greenhouse gas emissions. Unfortunately, these pledges are non-binding, and many nations are not on track to meet their goals. (Under President Trump, the U.S. has withdrawn from the Paris agreement entirely.) Even if every pledge was fulfilled, the average world temperature, which is now about 1.1 degrees Celsius (two degrees Fahrenheit) above pre-industrial levels, would increase by an additional two degrees Celsius (3.6 degrees Fahrenheit) by the end of the century, resulting in catastrophic climate conditions.

Just as a person with a high fever suffers from many negative symptoms, there have been many harmful effects of the increased global temperature. Polar icecaps and glaciers worldwide have been melting rapidly, faster than scientific projections. This has caused an increase in ocean levels worldwide with the potential for major flooding. Glaciers serve as “reservoirs in the sky,” providing essential water from spring melting for irrigating cops every spring, so their retreat will be a major threat to future food supplies for an increasing world population.

There has also been an increase in the number and severity of droughts, wildfires, storms and floods. Of course, there have always been such climate events but climate change has made them more destructive. For example, there are three climate-related factors that can increase the severity of hurricanes:

2. The seas have risen which increases storm surges; there is already ‘sunny day flooding’ in coastal cities like Miami, Florida due to higher tides;

3. The bodies of water are warmer, which adds more energy to storms.

California has been subjected to so many severe climate events recently that its former governor, Jerry Brown, stated that “humanity is on a collision course with nature.”

Another major negative factor is that the Pentagon and other military groups believe that climate change will increase the potential for instability, terrorism and war by reducing access to food and clean water and by causing tens of millions of desperate refugees to flee from droughts, wildfire, floods, storms, and other effects of climate change.

Already, a major, multi-year drought in Syria drove many farmers off their land into already overcrowded cities, where discontent and protests boiled over into a civil war. which resulted in some 600,000 deaths and millions uprooted from their homes. A major drought in the Sudan similarly resulted in a civil war there.

Unfortunately, prospects for the future are truly terrifying. Climate experts believe that we are close to an irreversible tipping point where climate change will spiral out of control, with disastrous consequences, unless major positive changes soon occur. The potential for such a tipping point has increased because of the previously mentioned self-reinforcing climate feedback loops. For example, when there are major wildfires, which is happening increasingly in our warmer world, trees, which absorb and store CO2, are destroyed and the burning trees emit much CO2 into the atmosphere, increasing the potential for additional wildfires and other climate events. Also when ice, a very good reflector of the sun’s rays melts, the darker soil or water that is revealed absorbs much more of the sun’s energy, causing more ice to melt, starting a potentially very damaging vicious cycle. This also results in methane being released from the formerly frozen soil, creating another positive feedback loop.

Another alarming factor is that, while climate experts believe that 350 parts per million (ppm) of atmospheric CO2 is a threshold value for climate stability, above which the potential for more frequent and severe climate events is greatly increased, but the world has now reached 414 ppm.

Slowing climate change is an especially important issue for Israel, as a rising Mediterranean Sea could inundate the coastal plain where much of Israel’s population and infrastructure are located, and the increasingly hot and dry Middle East that climate experts are projecting makes terrorism and war in the region more likely.

Given the above dangers, averting a potential climate catastrophe should be a central focus of civilization today, in order to leave an inhabitable world for future generations. Every aspect of life should be considered. The world has to shift to renewable forms of energy, improve our transportation systems, produce more efficient cars and other means of transportation, produce far less meat and other animal-based foods, and do everything else possible to reduce greenhouse gas emissions (GHGs).

As president emeritus of Jewish Veg, formerly Jewish Vegetarians of North America, I want to stress the generally disregarded importance of shifts toward vegetarian and vegan diets to efforts to reduce climate change. Animal-based agriculture is a major contributor to climate change, largely due to the emission of methane from cows, sheep, and pigs, since methane is about 80 times as potent as CO2 per molecule in warming the atmosphere, during the 20 years that the gas is in the atmosphere.

2. A 2009 front-page story in World Watch magazine, “Livestock and Climate Change,” by two environmentalists associated with the World Bank, asserted that the livestock sector was responsible for at least 51% of all human-induced GHGs. Other analyses found lower percents, but all indicated significant amounts.

Therefore, it is widely accepted among climate experts that a major shift away from animal-based diets is essential to efforts to avert a climate catastrophe.

Because the threats are so great, it is essential that everyone make preventing a climate catastrophe a major priority, and make every effort to make dietary and other lifestyle changes, in order to help shift our imperiled planet onto a sustainable path. Unfortunately, “denial is not just a river in Egypt,” and most people today are, in effect, rearranging the deck chairs on the Titanic, as we head toward a giant iceberg.

It is essential that Jews play a major role in efforts to avert a climate catastrophe. Fortunately, Judaism offers powerful environmental teachings that can and must be applied. These include:

* The mandate to be shomrei adamah (guardians of the earth), based on the admonition that we should “work the earth and guard it” (Genesis 2:15);

* The prohibition of bal tashchit, that we should not waste or unnecessarily destroy anything of value (based on Deuteronomy 20:19. 20);

* The teaching that,"The earth is the Lord's and the fullness thereof" (Psalms 24:1), and that the assigned role of the Jewish people is to enhance the world as "partners of God in the work of creation.” (Shabbat 10a).

As co-workers with God, charged with the task of being a light unto the nations (Isaiah 49:6) and working toward tikkun olam (healing and restoring the earth), it is essential that we Jews take an active role in applying our eternal, sacred values in struggles to sharply reduce climate changes and other environmental threats. Based on the central Jewish mandates to work with God in preserving the earth, Jews must work with others for significant changes in society’s economic and production systems, values, and life-styles. The fate of humanity and God’s precious earth are at stake. There is no Planet B!

Applying these teachings would help revitalize Judaism by showing the relevance of its eternal teachings to current societal threats. This might attract many idealistic Jews who are currently somewhat alienated from Jewish life and help them to feel more comfortable with their religion.

When I hear of a couple getting married or a baby being born, I wonder how their lives will be affected by our rapidly warming world, with its rising oceans and increasingly severe storms. This is especially relevant to me as I have happily celebrated three grandchildren getting married in the past three years, one of whom gave birth to my first great grandchild. I fear for their future and that of all of humanity.