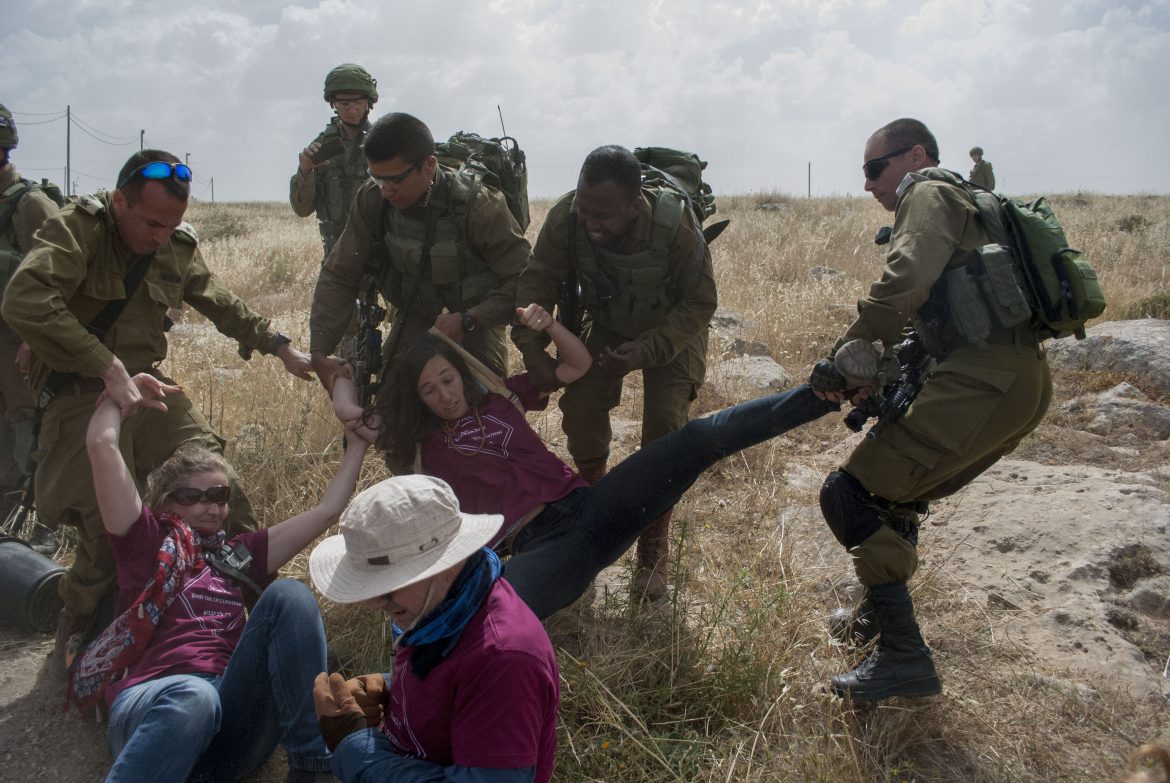 Last Friday I joined a group of about 125 mostly 20 to 40 something Jews from North America and Israel to repair a rocky and bumpy dirt road that serviced five struggling villages in the southern West Bank. The group and the program were put together by All That’s Left and The Center for Jewish Nonviolence working with Palestinian representatives from these and other villages in the South Hebron Hills.

We gathered at 5 am in Bethlehem and set off on tour buses to a road near the village of Bir al-Eid near two settler outposts - Mitzpe Yair and Nof Nesher. We were met there by the Palestinians from nearby villages and several members of the press.

The road was indeed in poor shape, and I was not sure how much progress we could make without any heavy equipment. Leaders unloaded buckets and tools and people more experienced than me started gathering dirt and stones to fill potholes and started breaking or digging out large rocks in the road to be removed. I got into a rhythm with a Palestinian boy and an American woman of digging small stones into a bucket and then dropping them into potholes while someone else pushed them down by hand and leveled them. This was being repeated up and down the road.

In each direction we could see a settlement or outpost - all with paved roads and raised electric lines. The villages the roads served looked pretty threadbare. I was told that many villagers had fled to nearby cities as the settlements grew and took over their land and water supply and as they were unable to get permission to expand their homes or villages as their families grew. In the distance we could see the sprawl of the West Bank city of Yatta where many of these families had relocated.

After about an hour, and with many potholes filled, we attracted the attention of some nearby settlers. I was told this outpost was illegal and was populated by South Africans who had fled when apartheid fell, converted to Judaism, and become settlers. I’m not sure if the settlers called in the army or if the army came on their own, but soon a Jeep with two soldiers stopped on the nearby main road and started watching us. This Jeep was followed by others and soon there were about 30-40 IDF soldiers armed and watching us.

I could not understand what was going on in Hebrew but I started to waffle between feeling scared and feeling like this was my Army and we were fixing a dirt road and there was nothing to be scared about.

I was later told the Army asked some group members who were closer to the main road and the settlement to stop working and leave the area. Some members of the group apparently argued that we were only repairing a road and we were doing nothing illegal.  When they refused to leave the area voluntarily, IDF soldiers told them they had declared the whole area closed for national security reasons and told them they had to leave.

Suddenly - BOOM - BOOM - several stun Grenades were set off by the army in the middle of a cluster of people. Some of them continued to argue about our right to repair the road and others sat down in place. Me? I wasn’t sure what to do. Our bus was in a village past the soldiers and I certainly wasn’t going to walk that way. But I also wasn’t excited about walking in the other direction towards another settlement. I was trying to think of what I should be doing. There were now a lot of soldiers and it was clear they weren’t there to protect me.

I was shocked by the suddenness and ferocity of the violence. Soldiers grabbed volunteers and put them in chokeholds and dragged them away. Soldiers picked up volunteers and body slammed them to the ground. I watched soldiers roughhouse a small woman and then drag her away. I watched them violently shove a friend who tried to help her. One Volunteer’s shirt appeared to be ripped off. The soldiers seemed to particularly be looking for the Palestinians who were working with us and trampled volunteers who were in their way. More stun grenades were fired and I was told to run as the army would soon shoot tear gas. I watched four soldiers chase four Palestinian boys who minutes before had been kneeling and fixing the road with me. They caught one and right in front of me they choked him until his body went limp and then slammed him to the ground and then dragged him away.

The army took about 15 volunteers including Americans, Israelis, and Palestinians into custody. They took a Palestinian press photographer and journalist into custody even though they were waving their credentials.  I walked with one of the other volunteers for about a half hour down the road away from the soldiers and I was saddened as he shared with me how the occupation made him question his Zionism. We passed the villages and ended up near another settlement where one of our buses had driven and parked on the side of the road.

I know that everything in these parts is a political act. I understand that some Israelis would like these Palestinian villages to disappear. I was told the army or settlers might try to stop us from repairing the road. But I can’t help wondering what happens to us when our 19 year olds treat unarmed volunteers repairing a road like this.

Ron Beller is a Board Member of the JCC of San Francisco and The Kitchen.

One thought on “What Happens When Jews and Palestinians Repair Palestinian Roads?”