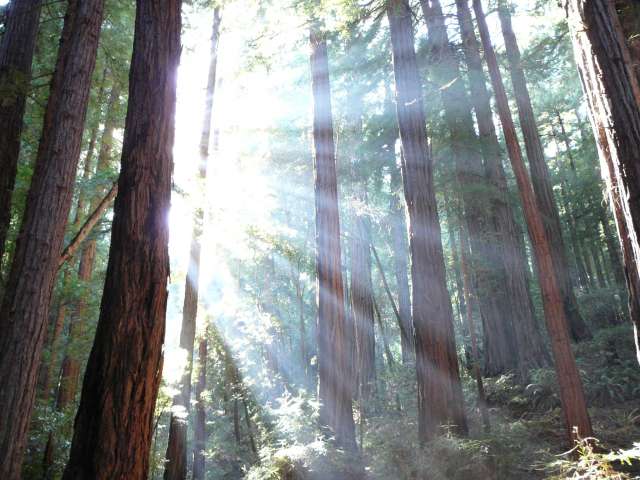 “The whole is greater than the sum of the parts” is an old adage, but it could be one of the most important keys to a healthy, meaningful life. People yearn to be a part of something. When we are a part of a something, we feel whole. When we see how things connect and relate to form a whole, they make sense and resonate: they come alive.

In 1973 I arrived at Camp Swig, a Reform Jewish summer camp in Big Basin, California, a shy 15 year old kid from Hawai`i. My parents, New York Jewish intellectuals, moved to Hawai`i when I was a baby. They wanted nothing more than to get away from the New York part of their identities, and were fairly unconcerned with the Jewish part as well. So to say I didn’t have much Jewish background would be an understatement.

But Camp Swig hit me like a revelation. There was something magical about it. I could feel it especially on Friday afternoons, when we sang together in a big circle under the redwoods; everyone cleaned up and dressed in white. I loved the sound of the Hebrew songs. I loved discussing and earnestly arguing about God, social justice, and identity. I loved the artistic creativity and do-it-yourself ethic seen when campers painted the water tower or dug our own gaga pit into the ground instead of just turning over some benches. I loved the camp friendships. The fact that we were all thrown together in an intense, highly interactive social environment, away from the cliques and in-groups of home made it easy to talk, easy to interact (or at least easier for this shy kid to meet girls).  That magical mixture of camp life changed me, as it has for many Jewish teens—it made me finally feel whole. When I graduated high school and got too old for summer camp, I found that I needed to go in search for whatever it was I had experienced there.

It wasn’t a straight path, but the next time I deeply felt that wholeness was in my early 20s, when I was involved in the Orthodox Judaism of Jerusalem; especially on Shabbat. Shabbat in the Orthodox world wasn’t the same as at Camp Swig—there was no swaying with a pretty girl on each arm singing Hebrew songs—but it came to epitomize for me much of what attracted me to Orthodoxy. On Shabbat, I felt I was entering into something that gently held me for 25 hours, transforming my experience of time and self. I especially loved the Shabbat meals.  They were almost always with a group of friends, maybe with a family or two. There wasn’t anything wrong with small talk, catching up, and joking around, but it was also perfectly normal for someone at the table to open up a book of commentaries on the weekly Torah portion and read a little, offer some  of his or her own thoughts on it, and start a discussion.

After a good discussion, we sang. The singing of Shabbat songs (z’mirot in Hebrew) is true folk music in the sense that tunes are composed, learned, and passed on from person to person. Sometimes we’d lose ourselves in the singing and it would go on for hours.

Put together with good food, and a little rest (sometimes I’d take a short nap right in the middle of the meal, lying down on a couch and catching a few z’s before returning to the table) the Shabbat meals of my Orthodox days were usually very restorative and often richly satisfying experiences.  Deep friendships were created, personal journeys were navigated, and I really did understand why Ahad HaAm had famously said, “It is not that the Jewish people kept Shabbat, but Shabbat has kept the Jewish people.”

What was the commonality between the Camp Swig experience and my Jerusalem, Orthodox Shabbatot? Both had the same magic—it’s the magic that happens when people come together long enough, or intentionally enough, to let down their guards; to share something of themselves; to enter into a circle (literally or metaphorically) and focus on something larger than themselves.